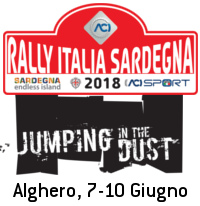 Alghero (Italy), June 8, 2018 – Second leg of the 2018 Rally Italia Sardegna, seventh round of the World Rally Championship, was considered the decisive one, but actually everything will be decided on Sunday during the last four special stages. The difficult stages at “Coiluna Loelle”, “Monti di Alà” and “Monte Lerno” did not establish a clear situation for the final victory. However, they defined two main competitors, that are also the two drivers at the top of the championship standings: world champion Sebastien Ogier, with Julien Ingrassia on the M-Sport Ford Fiesta WRC, and actual championship leader Thierry Neuville, who shares with Nicolas Gilsoul the Hyundai Motorsport i20 Coupé WRC. After 16 special stages and over 260 kilometres of wild racing on the narrow gravel roads in the North of Sardinia only 3.9 seconds devide the two protagonists, with the French driver just ahead of the Belgian rival.

The fight for third place was still very open until the final road section of Saturday between the two Toyota Yaris WRC of Jari-Matti Latvala – Mikka Anttila and Esapekka Lappi – Janne Ferm, but came to a dramatic solution when Latvala had to stop because of alternator issues after he hit a rock on SS16 “Monte Lerno 2”, the last of the day. Latvala’s issues promoted Lappi on third 54.2 seconds from Ogier, with Hayden Paddon – Sebastian Marshall (Hyundai i20 Coupé WRC) and Mads Ostberg – Torstein Eriksen (Citroen C3 WRC) further away for the fourth position battle.